Durability, functionality and beauty are the three main principles defining the “most beautiful metro in the world”. Around three billion Euro (including one fully allocated from European funds) invested for one of the most significant public work projects in Italy: the enhancement has changed the face of Naples and will continue to do so in the future.

Its Metro has propelled Naples into the same league as the major European cities. Today, around 42 million people use the metro every year. Furthermore, its stations are within walking distance for nearly half of the city’s population.

The Metro is an enormous improvement affecting Naples residents’ quality of living and the way the City welcomes tourists. Furthermore, this has also played an important social role by finally connecting the city centre to the outskirts, Scampia with Vomero and the centre. This system is also so innovative that universities from across the world have studied its technologies and excavations. In fact, it is characterised by stations built 40 metres below sea level and larger than the San Paolo stadium. It also uses technologies at the global cutting-edge. Lastly, the Metro has had the distinction of setting in motion a huge time machine. More than 250 million Euro has been spent on archaeology, leading to the discovery of the ancient Parthenope port, with its over 30-metre-long ships, as well as the place where the Olympics were relocated to in the 1st century AD. This has been a journey through time which, from Angevin bastions, to findings from the Aragonese period, takes us through to the present day. This is a time where the world’s greatest architects have been able to build extraordinary stations which act as the galleries of a huge “must-see gallery” to view works from some of the most renowned contemporary artists – from Sol Lewitt, Michelangelo Pistoletto, Mario Merz, Perino & Vele to Jannis Kounnellis.

It is the largest free public art project in Italy.

Over the next few years, the Naples Metro will continue to grow, connecting Capodichino to the city, linking the three points of access to Naples (the port, airport, and train station), and bringing the western districts, through Chiaia and Villa Comunale, closer to the city centre. Passengers will be able to reach the airport from Mostra d’Oltremare, to go from Vomero to Centro Direzionale, and from Mergellina to Poggioreale.

This is a project that makes the city even more beautiful and easier to live in. 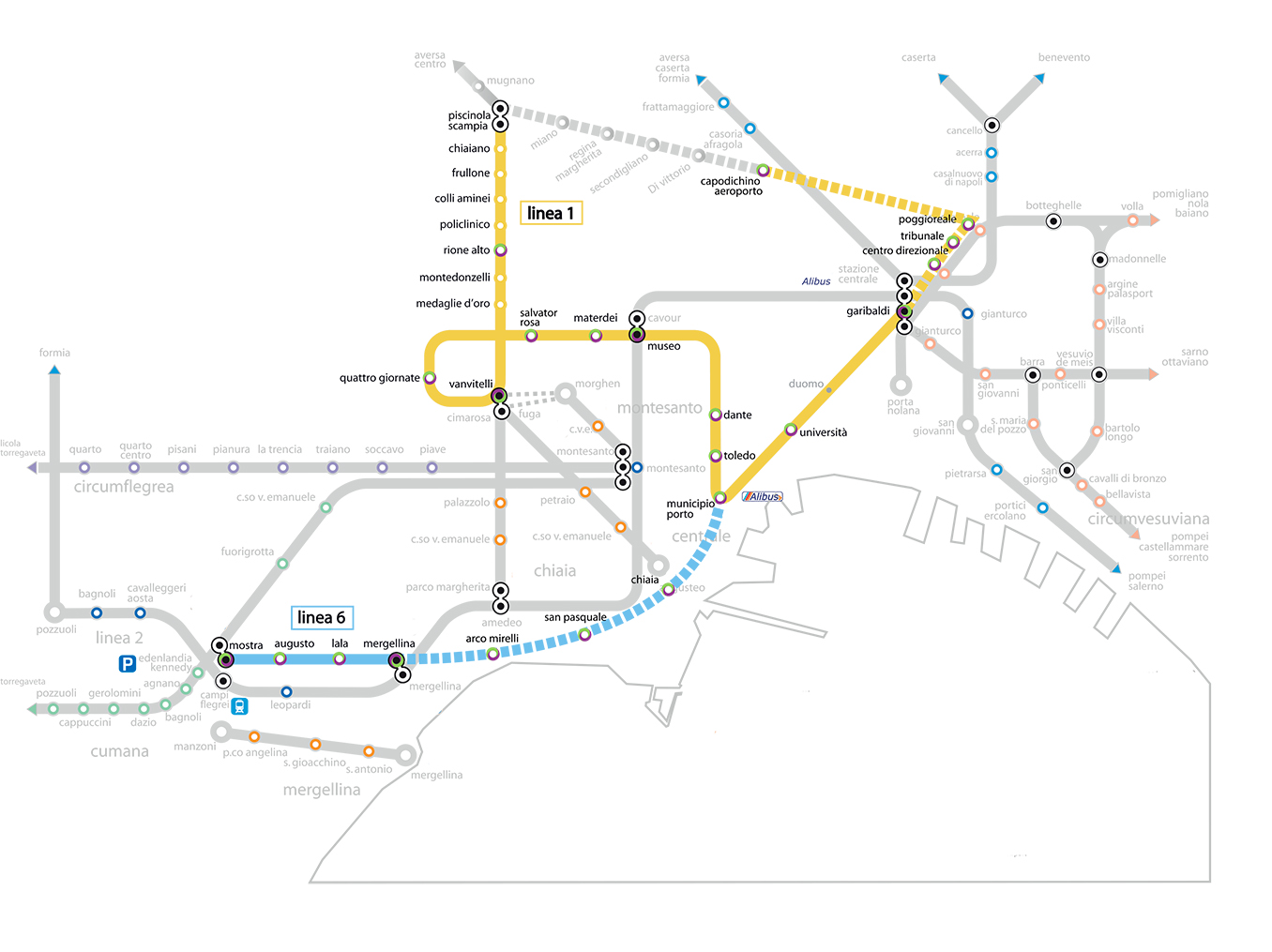 We may request cookies to be set on your device. We use cookies to let us know when you visit our websites, how you interact with us, to enrich your user experience, and to customize your relationship with our website.

Click on the different category headings to find out more. You can also change some of your preferences. Note that blocking some types of cookies may impact your experience on our websites and the services we are able to offer.

These cookies are strictly necessary to provide you with services available through our website and to use some of its features.

Because these cookies are strictly necessary to deliver the website, refuseing them will have impact how our site functions. You always can block or delete cookies by changing your browser settings and force blocking all cookies on this website. But this will always prompt you to accept/refuse cookies when revisiting our site.

We fully respect if you want to refuse cookies but to avoid asking you again and again kindly allow us to store a cookie for that. You are free to opt out any time or opt in for other cookies to get a better experience. If you refuse cookies we will remove all set cookies in our domain.

We provide you with a list of stored cookies on your computer in our domain so you can check what we stored. Due to security reasons we are not able to show or modify cookies from other domains. You can check these in your browser security settings.

These cookies collect information that is used either in aggregate form to help us understand how our website is being used or how effective our marketing campaigns are, or to help us customize our website and application for you in order to enhance your experience.

If you do not want that we track your visit to our site you can disable tracking in your browser here:

We also use different external services like Google Webfonts, Google Maps, and external Video providers. Since these providers may collect personal data like your IP address we allow you to block them here. Please be aware that this might heavily reduce the functionality and appearance of our site. Changes will take effect once you reload the page.

The following cookies are also needed - You can choose if you want to allow them: